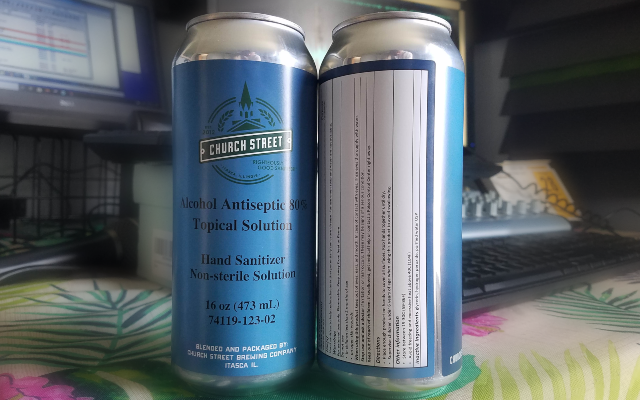 That’s right. It’s sanitizer…in a can.

This is where we are right now!

Itasca’s Church Street Brewing Company is being the savior to many by producing hundreds upon hundreds of gallons of hand sanitizer. They have even began to distribute it to other breweries around the area…I happened to grab mine at Will County Brewing Company in Shorewood.

I saw this and knew I needed to get four of them. Two for me. One for my mom because she asked and that’s what you do for your mom. And one to keep as a souvenir for when my grandkids ask about the Great Coronavirus Pandemic of 2020, and I stumble to the basement and pull out a dusty blue can and I says to them, I says, “Kids, it was so bad they were putting GD hand sanitizer in GD beer cans!”

They started small, filling 2.5 oz containers, but as the need for sanitizer grew, so did their production of it. Now, Church Street is producing 900 gallons of the stuff per day. PER FREAKIN’ DAY! They’ve donated the stuff to hospitals and non-profits all over northeast Illinois and have sold it to place like the United States Postal Service, large manufacturing companies, home health care providers, and a shipment of 200 cases (4,800 cans) to one of the largest hospital systems in Illinois.

And this stuff is legit: 80% ethanol made at the Church Street brewery, which had to be officially permitted by the FDA to make the stuff. Thanks to a nearby laboratory donating their testing technology, their sanitizer is well within FDA specs.

You can pick up 2.5 oz bottles for free at their brewery, but I bought my four-pack down at my local brewery, Will County Brewing Company, who said they nearly sold out of the stuff in just two days! Judging by this Facebook post from CSBC, other breweries around the area may have it stocked and ready for you to take home as well:

And damn it, they were right! Canitizer wasn’t the only thing I took home from Will County Brewing Company (thanks James!).

Besides Will County Brewing Company, other places I’ve seen it available are Whiskey Hill (Westmont) and Sew Hop’d (Huntley).

View all posts by suburbanconnected